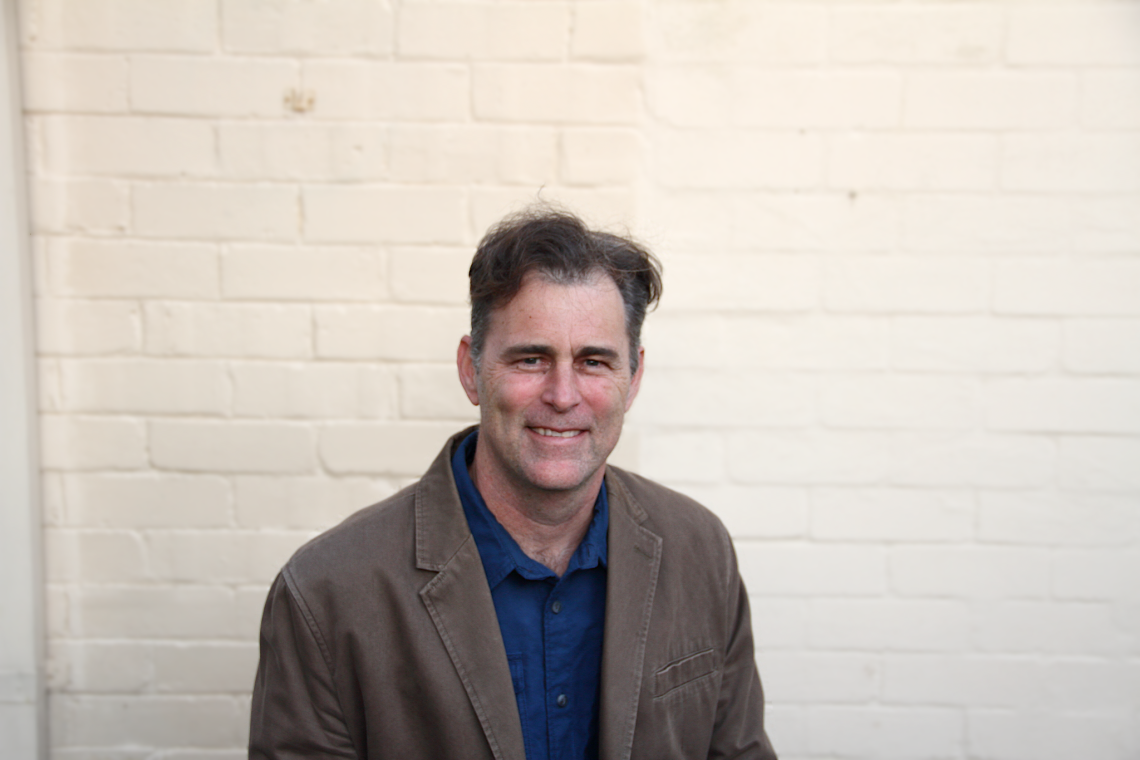 One hundred and fifty feet above my head, 26-year-old American BASE jumper Jamie Serchia begins his brief and desperate struggle for life.

After executing a back flip from the 340-foot Menara Tower, in the northern Malaysian city of Alor Setar, one of his steering lines has wrapped itself around his parachute canopy on deployment, collapsing two of its seven cells. It doesn’t sound like much, but with almost one third of his lift missing, Jamie is going down fast.

I watch with mounting horror as he fights to reinflate the canopy. First, he tries to clear the lineover by reefing the brake lines hard. It doesn’t work. One hundred feet to go. Like a wobbling top, the chute begins rotating around its axis, spinning faster and faster. Jamie throws away the steering toggles, hoping the snagged line will flip off. That doesn’t work either. Fifty feet. The speed of his descent is appalling. Frantically, he seizes hold of his risers and tries to flare, gets his flailing legs underneath him to absorb the approaching hammer blow. It occurs to me that I’m about to watch a man die, but I can’t turn away, somehow it seems disrespectful.

Jamie impacts the paving at the base of the tower with a terrible crack. As his chute settles like a shroud, I run towards him. Last night he was sharing jokes in the hotel bar, that morning we shared a cab. Under the stifling tropical sun, the crowd presses in claustrophobically. It seems my worst fears about BASE-jumping have been realised, and its only day two of my journey to explore a sport that receives more negative publicity than any other. 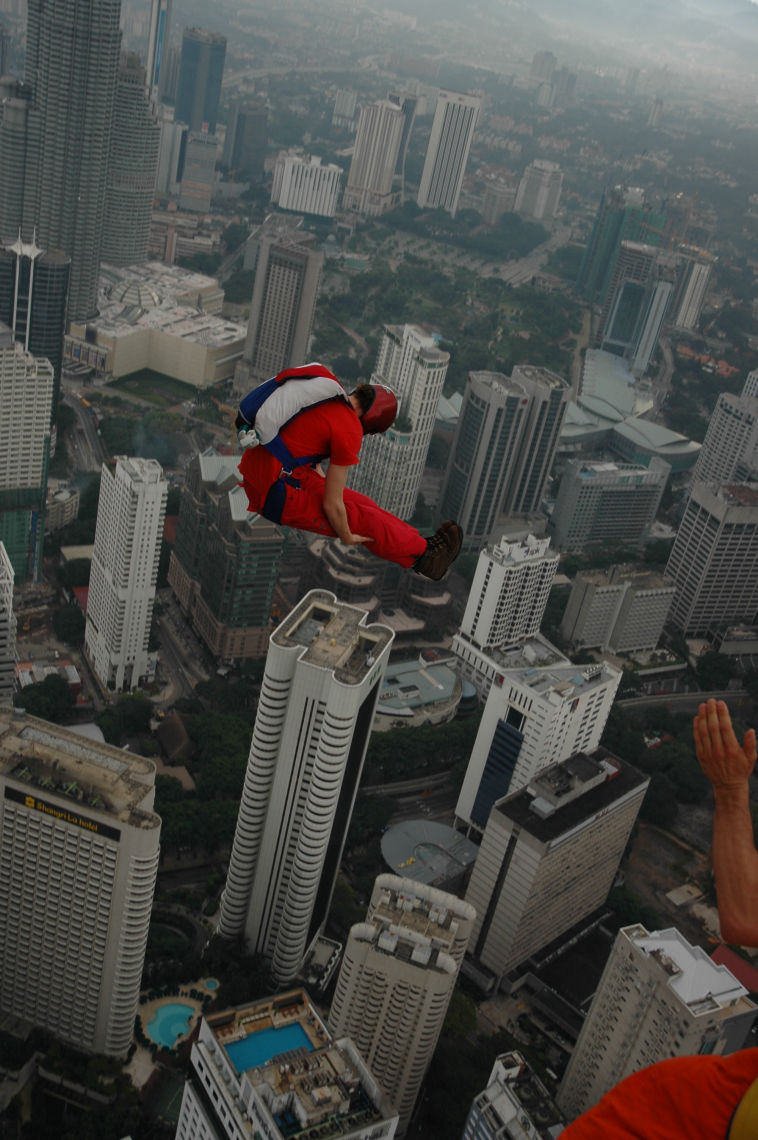 I’ve come to Malaysia to observe two international BASE jumping events which raise money for charity. The first at Menara Tower, Alor Setar; exit point 340 feet, the second: the Menara Tower, Kuala Lumpur – exit point a whopping 974 feet. The country not only has tall buildings to jump from, the people who own them don’t seem troubled by the prospect of the negative PR that would erupt in Australia should a fatality occur.

BASE stands for Building, Antennae, Span and Earth. While lone daredevils were making parachute jumps from fixed objects way back in the nineteenth century, it wasn’t until Carl Boenish, the father of modern BASE jumping began leaping off cliffs in Yosemite National Park with modern gear and freefall techniques that the sport was born.

Back at the top of Menara Alor Tower, secured with a lanyard, I’m feeling sick watching jumper after jumper plunge into the void. For the next two weeks, whenever I close my eyes, I’ll be falling, which makes getting to sleep hard. The jumpers have a scant two seconds, three at a pinch, to deploy their canopy or become paste. Most freefall just fifty feet before deploying, a process that eats up another 120-150 feet, then they’ve got roughly the same again to land in a 200 foot square drop zone surrounded by flagpoles, crowds, and two roads crammed with Malaysian traffic. 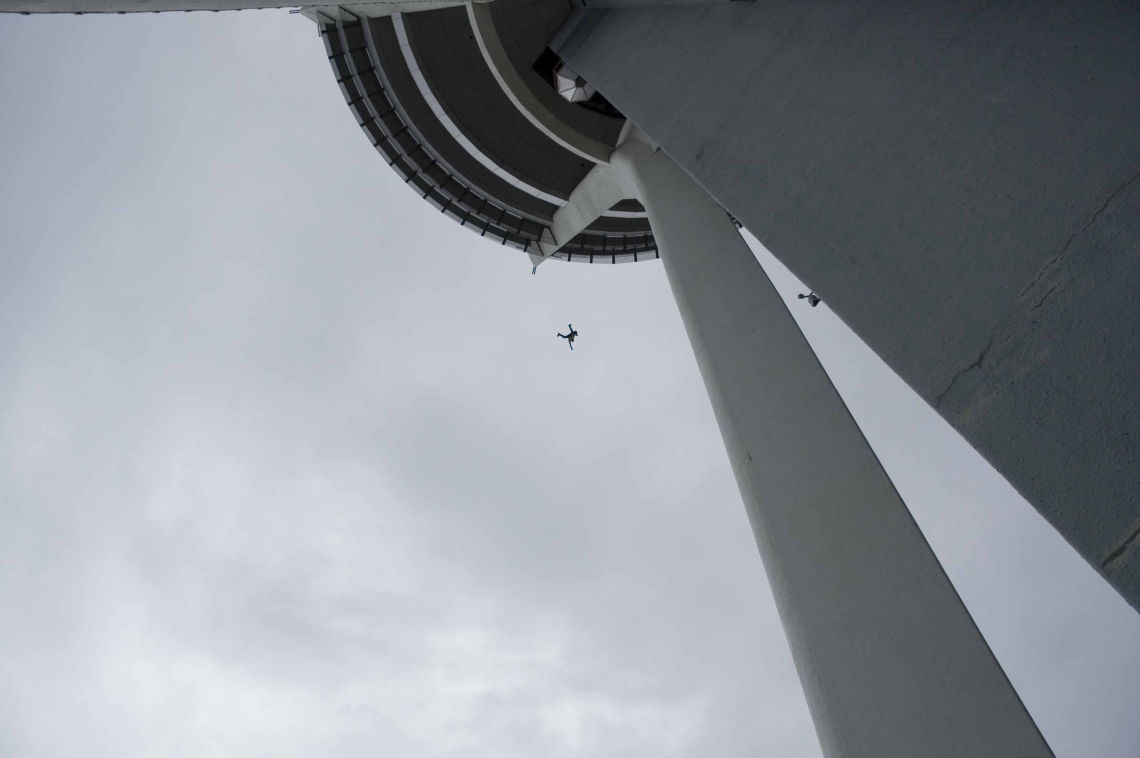 BASE rigs are designed to open first time, every time. With less air cells than a regular skydiving chute, they inflate faster and have quick opening vents to allow lower freefalls. A slider (an adjustable square of fabric on the guidelines) controls deployment speed, and minimises the entanglements and tension knots that can turn a canopy into a useless appendage of saggy Nylon. A tailgate prevents lineovers. Since its adoption there have very few incidents of this over many thousands of jumps. Jamie Serchia’s is one of them.

He is alive! I tell him to lie still as he tries to sit up. He doesn’t want to straighten his legs, but at least he can move them. Three ambulance women in headscarves fan him while a doctor extricates him from his rig. They take him away on a stretcher to a first aid tent. When they take him out to the ambulance, he gives me the thumbs up. Tomorrow we discover he has a compressed fracture of his L2 vertebrae.

Although KL Tower is almost three times higher, it feels much safer in comparison. I’m told this is due to depth perception: above a certain height the human brain can’t comprehend distance to ground. And in reality, it is safer because height equals more time.

Watching from the summit, the freefalling jumpers soon become specks, their canopies on opening no bigger than your thumbnail. How do they know when it’s time to deploy? “Time speeds up when you’re jumping,” explains Ken Miller. “Six seconds ends up feeling like three, which is why counting isn’t recommended.” While some gauge their descent against the building, most rely on gut feeling. “It’s when I’m getting scared,” says Gary Cunningham, President of the Australian BASE Association, “which is any time after halfway.”

I’m disconcerted by the nonchalance of the other jumpers who continue to pack and jump. “How’s Jamie?” someone asks. I feel like asking why the hell they don’t take the trouble to go find out. At lunch I’m so nauseous I can hardly eat; their indifference seems callous.

By the end of the day though I’ve understood. These jumpers have waited all year for this opportunity. That night, they spend the entire evening with Jamie at the hospital. “If he’d been on his death bed we’d have raced straight over,” explains one, “but it was just a fracture and until we’re done jumping, he can wait”. As they laugh, I’m reminded of the camaraderie of WW2 fighter squadrons, the black humour and bonhomie masking concern, but only up to a point, because I also get the sense jumpers are wary of getting too close with each other, understandable in such a high risk pursuit. Incredibly, Jamie makes it to the last night banquet, courtesy of a back brace and significant quantities of beer. 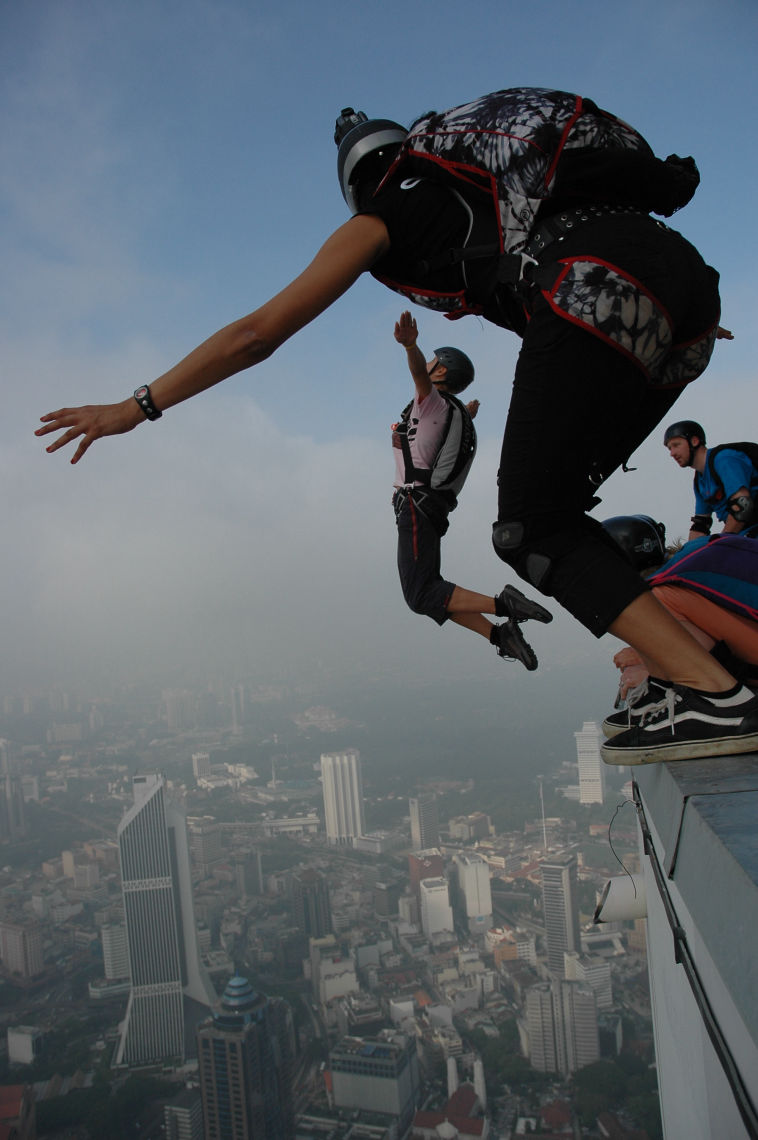 So, what makes BASE jumpers tick? Are they just adrenaline junkies flirting with death, aerial trespassers with nothing better to do than sneak around causing trouble for emergency services? Most of them seem, well, so normal: they’re engineers, academics, solicitors, IT consultants, pilots and military, including past and present members of special forces. None of them were anti-social. On the contrary, I found them to be highly motivated individuals, dedicated to the mastery of their sport.

While some of the jumpers I met covering this story have since died in pursuit of their passion (some may call it an addiction), I cannot condemn their choices. In the modern world we seek to extend life at all costs, even at the expense of meaning. The jumpers I met were spectacular, vibrant, bursting at the seams with energy as they maximised experience on their terms. I believe none of the jumpers I met wanted to die; yet the nature of their sport magnifies the risk of death, which eventually come to us all.

Kiwi jumper Ted Rudd (who died in 2011) best articulated a philosophy shared by many: “I think life is measured in the number of magic moments you have. And I’ve already had more than my fair share.”

[This is an edited version of the feature article ‘Falling Idols’ by Jake Avila, which appeared in Alpha magazine, January 2006]

Jake Avila is a full-time writer with a BA in Writing and Information Technology. He has a background in freelance journalism writing on politics, culture, technology, and sport, and taught secondary English for ten years. In 2019, he won the Adventure Writer's Competition Clive Cussler Grandmaster Award for Cave Diver and then went on to win the Wilbur Smith Adventure Writing Prize for the same book in 2020.

Cave Diver [Bonnier Books UK]
A high-octane, fast-paced novel from a new voice in adventure writing and the winner of a Wilbur Smith Adventure Writing Prize. For fans of Clive Cussler and Wilbur Smith.

Acclaimed explorer Rob Nash has lost his way. Grieving the death of his wife, and blaming himself, he sees no reason to carry on. But when his 'Uncle' Frank Douglas offers him the chance to lead a cave diving expedition in the jungles of Papua, Nash can see some light at the end of the tunnel.
But the expedition might not be what it seems. With a decades old Japanese submarine buried deep in a cavern, and a team hell-bent on unleashing the treasures it hides, Nash finds himself on a ship heading for danger. With a lethal band of criminals on board, who will stop at nothing to get the gold, Nash is fighting for his life. Whilst battling his own demons, can he forgive himself for the wrongs of his past - and survive the perils of the deep?

'This has it all - exotic locations, a riveting plot, and heart-pounding suspense from beginning to end. An outstanding thriller not to be missed.' Dirk Cussler