We join Wilbur as a young man on Namibia’s Skeleton Coast. Having successfully scrounged up a job on one of the fishing vessels that plies Walvis Bay, he soon finds that he might have gotten more than he bargained for. . .

Like all new initiates, we were treated as pond life. True to his word, Boots gave us all the dangerous jobs, which we jumped at because we knew no better. If there was a practical joke to be played, it was at our expense. My own initiation came early. Sent by the ship’s engineer to bring up cotton wastes from below deck, I plunged my arm into a container–only to discover it was the engineer’s latrine, the cotton wastes used in lieu of bog paper. From that day on I was christened Spook-gat or ‘ghost’s arsehole’ in Afrikaans.

Those first weeks aboard the Kingfisher were back-breaking. Never had I put my body through so many sustained trials. Though I was barely twenty years old, my joints ached and my muscles groaned–and only after days of hard work did I grow accustomed to the grind. There was much to learn, but before the first week had passed, I gained a special position on board that went some way to elevating my standing. 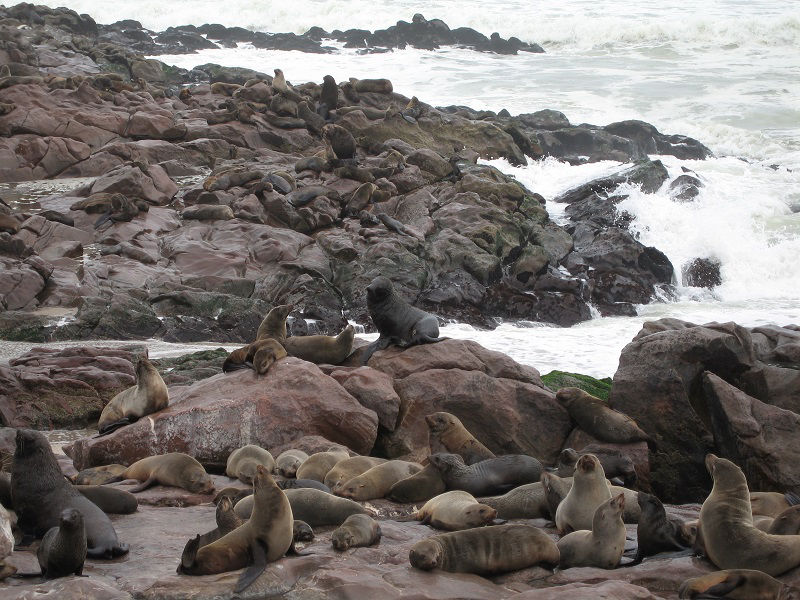 The casting of trawler nets was a complicated business. With one end of the line attached to the trawler, and the other to a little rowboat towed behind, we would head for what the skipper thought were the day’s best waters. At the back of the trawler, Boots Botha would survey the water for the first sign of a shoal. Usually it would be the darting of a pilchard just below the surface, perhaps even one or two cresting out of the swell. Pilchards gather in vast shoals, so as soon as one was spotted, we knew there were thousands more lurking underneath. It was at this point that the trawler would begin its circuit, lapping round the shoal in ever decreasing circles, bunching it into a tighter and tighter space. Sometimes the shoals would be so big that we’d have to unleash the rowboat, working the shoal so that it separated into two or three smaller shoals, whatever size best fitted our nets. As soon as the shoal was constricted, the surface of the water would come alive, quivering and glittering with the agitation of so many fish.

At the skipper’s command, the rowboat would be thrown loose, its ties unfastened so that it could stream off, trailing the net behind. Soon there would be two hundred feet of net out in the water. Only then would the skipper bring the trawler around the shoal to pick up the rowboat again and retie it, the shoal being surrounded by netting.

The fish were crowded together close to the surface while, underneath them, the net hung open. Now came the moment to close the net, trapping the fish within. Around the bottom of the net ran the lead line, laden with lead weights to hold it down. It was this line that had to be gathered up, taken back on board the trawler and put onto a winch to draw the bag closed. Yet, the net could not be fully closed until the heavy steel rings around the lead line were taken off.

The critical point came when the whole bunch of the net was up. The rings had a thick cable running through them but, to take them off and bring in the net, another line had to be fed through so that the thick cable could come out and the steel rings be taken off one by one. A man at the back of the boat would reach for a stick and try to feed this new line around. It was a painstaking job, but nothing else could happen until it was done. The rest of us had to wait.

After three days of watching the crew clumsily feeding the line through the rings, I jumped forward and put my arm through the rings and pulled the new line through. I was the only one on board whose hands could fit through the rings. The trawler men were amazed, even though it seemed to me like an obvious thing to do. The following day, when the net came up from the water, I was summoned. ‘Spook-gat!’ cried the boatman. ‘Here, Spook-gat, put your hand through here …’ I slipped my arm through the rings and fed the line again. I was pleased with my work. Every day I was saving the crew a half hour of frustration and impatience and, after that, the crewmen never looked at me with quite the same disdain.

At the end of every day, back at the jetties, suction pipes drew up our catch from the deck of the boat, and Boots Botha was paid. Nights were spent in exhaustion, or in drink, and come the next dawn, we would be back on shore, warming ourselves with coffee and waiting for the sun to spill enough light over the water to make fishing possible again.

We started to earn money. At first, it was enough for beer on nights when the hotels in Walvis Bay rang with the raucous sounds of fishermen who had come in from the sea. Then, as our catches grew bigger, so too did our cash and by the end of our trip I had made about £450, which was a king’s ransom in those days.

But it was blood money, sometimes literally. At sea, men risked their lives daily. Fingers were sliced off at the knuckles when the sea suddenly surged, tightening or wrenching at the nets. Hands were mangled or crushed against the sides of the boats. And, on one occasion I will never forget, I saw a man lose his life to the fickleness of the sea – an experience I would later use in my novel The Burning Shore.

We were some distance off the coast, with our nets already winching up, when our sister boat, owned by the same Cape Town brothers as the Kingfisher, drew near. Across the waters, we watched as they cast their nets, the line streaming off the back of the trawler. I saw one of their crewmen stumble, his ankle caught in the running line. For a terrible second he stood tall, then the sea was dragging the line away, his body snapped taut –  and he was gone, cartwheeling over the side. As he hit the water, still entangled in the netting, his crew rushed to snatch him from the depths, but it was too late. The line was already thirty feet under water. By the time he surfaced, he would be dead. 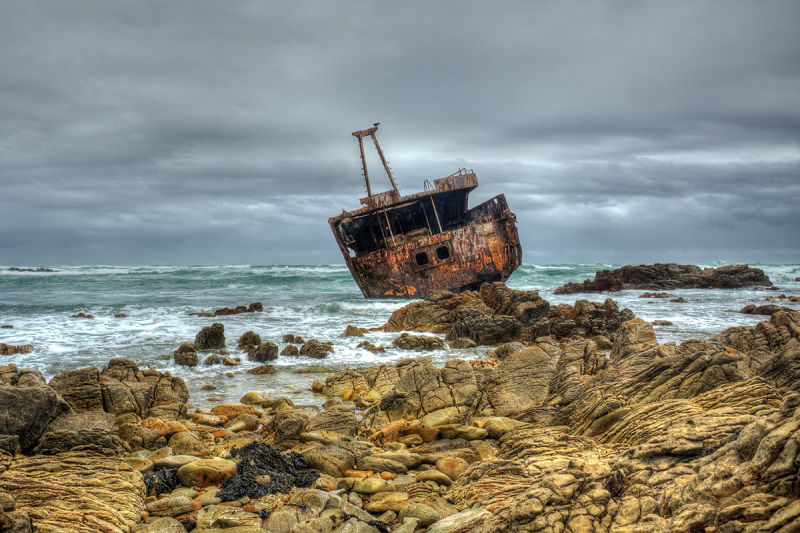 An hour passed. Maybe more. When it came time to draw in the nets, filled with pilchards, plankton – and the occasional shark or barracuda, to be cut free and tossed back into the water – there lay the man’s body, already beginning to bloat.

After four weeks working the Kingfisher, we had gained the grudging respect of Boots Botha and his crew. Both Hillary and I were hard-working boys, and one night we all went out on the town. The hotel in Walvis Bay was heaving with trawler men, and the crew of the Kingfisher were already deep into their cups. At the bar, Hillary and the chief engineer were rounding up more drinks while I propped up a table with Boots Botha and the rest. It had been a good day. One of our sister ships had been trapped at sea, their net filled with so many pilchards from such an unexpectedly vast shoal that they were laden down, unable to move. The Kingfisher came to the rescue and we spent the day ferrying parts of their catch back to port and, in doing so, had the most profitable day in the crew’s memory. Most of it was being spent in the hotel that night.

Boots was smashed out of his skull and he pulled me over for a heartfelt chat: ‘Spook-gat,’ he said, struggling to remember my real name. ‘Wilbur isn’t it? You’re a good man, I like you, so let me tell you. Every time you stick your bleddy arm through those rings, I get such a fright …’

Boots’ eyes were bloodshot with beer, and he seemed to be laughing at some joke only he knew the punchline to, his spittle flecking my ear.

‘Why?’ I asked. ‘Spook-gat, if the line breaks when your arm’s in the rings, all those rings are going to separate – and they’re going to have a pressure of about three hundred tonnes on them and your arm will look like a sliced loaf of bread.’

Now I understood the looks of consternation whenever I put my arm through the rings. I gazed around the room, at Hillary drinking, at the other members of the crew who all knew this simple truth that I did not. I had been risking my arm, perhaps my life, and not one of them had breathed a word. It was the law of the jungle and I was the little baby antelope squinting in the sun wondering why all the other animals had run away when a predator emerged. I smiled at my naivety. At least I was still alive to tell the tale. The next day, as we rode the waves beyond Walvis Bay, casting our nets and preparing to draw them in, the cry went out – ‘Spook-gat! Put your hand through these rings!’ I took one look at the grinning crew and told them in trawler man’s language that I was never going to put my hand in there again. ‘Go get your stick,’ I shouted. They’d been rumbled.

© Wilbur A. Smith (Excerpt from On Leopard Rock)

Betrayal on the high seas